Posted on November 30, 2010 Posted By: uufdc Categories: Movies That Matter 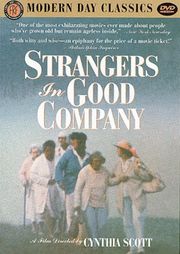 “STRANGERS IN GOOD COMPANY” will be shown Tuesday, December 21 at 4:30 pm. The film depicts a fictional survival story of a touring group of octogenarians that is stranded when their tour bus breaks down.

What would you do? One blue-haired woman removed her pantyhose to fashion a fish net to catch supper. Another wants to give up and die right there in a beautiful, remote and peaceful wilderness.

We may see them as old, but their actions and spirit suggest playfulness, creative energy, and wisdom. We soon regard them as sisters at recess giggling at the novelty of their unexpected adventure, happy to be in good company. When they reach a dilapidated and deserted house, it offers no amenities; no beds, no electricity, no water, no food. Each woman approaches the situation in a different way, but there is a buoyancy and resourcefulness about them in spite of some possible apprehensions concerning rescue and survival.

The film elicits thoughtful discussion about aging. Be prepared for a slower pace than an action film. The emphasis is on ordinary events that will reveal information about the lives and characters of the central figures. Stereotypical impressions of the old, especially those that suggest they are uniformly feeble and uninteresting, are dispelled; impositions of age have not prevented them from having lives that are meaningful and interesting.