Posted on November 28, 2011 Posted By: uufdc Categories: Movies That Matter 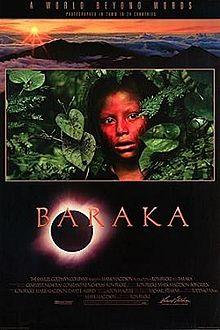 For the Holiday Season MTM will suspend the chatter and enjoy extraordinary visuals of our world on December 20 at 4:30 pm. Described as cerebral and mind-bending, Baraka will engage you.

Shot in 24 countries on 70mm film, this mesmerizing visual study conveys the relationship between humans and the environment, with images ranging from the daily devotions of Tibetan monks to time-lapse views of the Hong Kong skyline. Accompanied by diverse world music — without narration or dialogue — the scenes capture nature’s glory as well as its destruction, all expertly photographed by director and cinematographer Ron Fricke.

Visually compelling, intelligent, moving, awe-inspiring — the images alone make this no-dialogue film one of the few you’ll talk about, recommend to friends you care about, and continue to replay in your mind months after you’ve seen it. Global thinkers, naturalists, humanists alike will be thankful that they stumbled upon this informative and emotionally disturbing gem.  There are several scenes in this film that made me believe again that I haven’t seen it all yet! Don’t miss this one.  Highly recommended.