Posted on April 29, 2013 Posted By: uufdc Categories: Movies That Matter 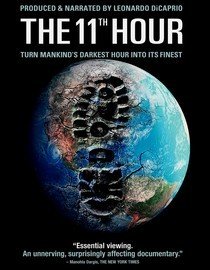 Movies That Matter presents a film reporting on the state of the natural environment on Tuesday, May 21 at 4:30 pm. The 11th Hour is a 2007 documentary film created, produced and narrated by Leonardo DiCaprio,. With contributions from over 50 politicians, scientists, and environmental activists, the film documents the grave problems facing the planet’s life systems. Global warming, deforestation, mass species extinction, and depletion of the oceans’ habitats are all addressed. The film’s premise is that the future of humanity is in jeopardy.

Experts interviewed underlined that everyone must become involved to reverse the destruction and climate change. The role of humans in the destruction of the environment is explained from the viewpoint of several different professional fields including environmental scientists, oceanographers, economic historians, and medical specialists. The many experts called upon in this documentary effectively demonstrated a consensus concerning human-caused climate change, and the many other impacts of industrialization such as the dramatic loss of species (biodiversity).

The 11th Hour asks why these things are happening and apportions blame in varying degrees to governmental indifference tied to its allegiance to a corporate economy that is addicted to growth at any cost and perhaps, most insinuating of all, to the culture of consumerism. Disposable has trumped sustainable in our society, and we’re now paying the price.

The film proposes potential solutions to these problems by calling for restorative action by the reshaping and rethinking of global human activity through technology, social responsibility and conservation.