Posted on July 29, 2013 Posted By: uufdc Categories: Movies That Matter 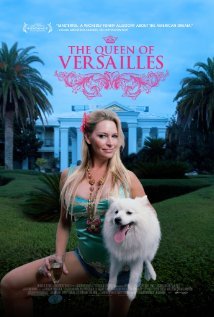 Join us at 4:30 pm on Tuesday, August 20 for The Queen of Versailles, a 2012 documentary about a billionaire family and their financial challenges in the wake of the economic crisis. With epic proportions of Shakespearean tragedy, the film follows Jackie and David Siegel, whose rags-to-riches success stories reveal the innate virtues and flaws of the American Dream. The film begins with the family triumphantly constructing the biggest house in America, a 90,000 sq. ft. palace. Over the next two years, their sprawling empire, fueled by the real estate bubble and cheap money, falters due to the economic crisis. Major changes in lifestyle and character ensue within the cross-cultural household of family members and domestic staff.

Washington Post columnist Ezra Klein called it “perhaps the single best film on the Great Recession”, writing that one scene, in which Siegel recounts a series of transactions that allowed him to purchase at a fraction of its original value a loan on which he owes money, “might stand as the single most complete vignette on the mechanics of the financial crisis and the subsequent slow recovery.” In a review of the film, The Economist called it “an uncomfortably intimate glimpse of a couple’s struggle with a harsh new reality,” concluding that “the film’s great achievement is that it invites both compassion and Schadenfreude. What could have been merely a silly send-up manages to be a meditation on marriage and a metaphor for the fragility of fortunes, big and small.”