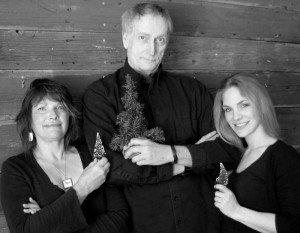 Small Forest takes the stage at the UU Fellowship on Saturday, March 1 at 7 pm to perform their original progressive folk/pop. With a unique sound that stretches the traditional fold boundaries, they invite the audience into their hearts offering songs like musical story poems and musical medicine for the soul. Admission is just $10 and the concert will be followed by a complimentary reception with the artists.

Three “trees” make up this Small Forest: mother/daughter songwriting team of Marybeth Mattson and Jeanne Kuhns, with their soaring vocals and harmonies, as well as Patrick Palmer who adds strong rhythmic bass playing and backup vocals. The trio has been performing together as Small Forest for just over a year, though they have been part of the Door County music scene as solo acts or in other bands for over a decade.

Kuhns’ latest CD Beautifully Strange has songs described as “beautifully poignant melodies effortlessly sung.” Mattson’s first CD Relative Hunger, released in 2102, features “a soulful rendition of her original songs.” Palmer played on both of their CDs. Small Forest plans to cut its own CD this year.

This performance is presented by the UUFDC Emerson Series, named for Ralph Waldo Emerson, an essayist, lecturer, poet, and Unitarian Minister. In 2002, UUFDC member and well-known music critic, the late Erik Eriksson created the series with the goal of providing affordable, top-notch cultural programs for the northern Door community.