Posted on March 28, 2015 Posted By: uufdc Categories: Movies That Matter 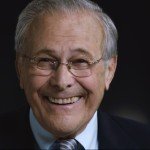 On Tuesday, April 21 at 4:30 pm, Movies That Matter presents The Unknown Known. This film by Academy Award-winning director Errol Morris (The Fog of War) offers a mesmerizing portrait of Donald Rumsfeld, one of the key architects of the Iraq War, and a larger-than-life character who provoked equal levels of fury and adulation from the American public. Rather than conducting a conventional interview, Morris has Rumsfeld perform and expound on his “snowflakes,” tens of thousands of memos (many never previously published) he composed as a congressman and as an advisor to four different presidents, twice as Secretary of Defense. These memos provide a window onto history—not history as it actually happened, but history as Rumsfeld wants us to see it. Morris makes plain that Rumsfeld’s “snowflakes”—whether intended to elucidate, rationalize, obfuscate, or control history—are contradicted by the facts. The Unknown Known is an illumination of the mystery of Donald Rumsfeld, an unknown known. (2013, 103 minutes)