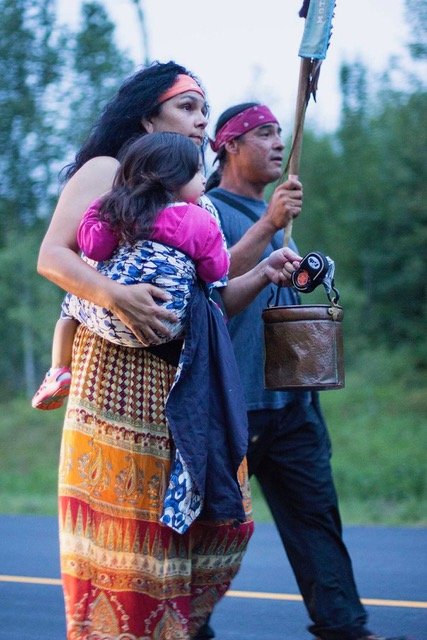 Jeff Pearcy and Meredith Watts photographed the last two days of a “water walk” organized by the Ojibwe elder Josephine Mandamin. This was the sixth of seven such walks by Indian women and men to honor water as a sacred element at a time when it is threatened. This walk began in Matane, Quebec, Canada and ended on Madeline Island near the Red Cliff Reservation in Wisconsin. It followed the route that elders believe the Anishinaabe people took from east to west in pre-historic times.

Native women of all tribes in the region were invited to participate. Jeff says: “The women always carried the water. It was a single copper kettle wrapped in leather. The men carried an Eagle Staff and protected the women. Prayers would often be said while walking, sometimes chanted. Walkers walked in relays. Younger people might walk a quarter to a half-mile. Older people would walk less. A caravan of support vehicles would follow and lead.”

Jeff Pearcy is the organizing photographer of “For Good” Photography in Milwaukee. He has over thirty years of experience as a photojournalist. His work on contemporary Cuba appeared in the Gallery in 2017. Meredith W. Watts is a retired social scientist from the University of Wisconsin-Milwaukee, now working as a photographer. Recently, his photos have been exhibited in the Museum of Wisconsin Art and the Walkers Point Center of the Arts. These photos are part of a growing number they are taking to document women as caretakers of water.

The exhibit is part of a year-long focus on Native American cultures by the Racial Justice Action Team of the Unitarian Universalist Fellowship of Door County, which is a branch of the Fellowship’s Social Justice Committee.

Register for Event: Art Gallery — Photographs of the Sacred Water Walk of the Ojibwe