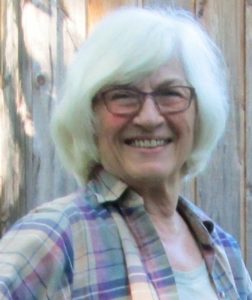 On Wednesday, December 14 at 7 pm, Karen Wilson is the featured reader at the UU’s Dickinson Poetry Series.

Wilson has resided in Juddville for close to 40 years.  While that doesn’t make her native here, it has been long enough to gain perspective.  When contemplating the changes she has seen, Wilson thinks back to both pair of her great-grandparents who were original settlers in Door County.

Born and raised in Sheboygan, Wilson’s has a degree in history from the University of Wisconsin. In 1977, she arrived in Door County after living in Madison and Poynette. She soon became active in the then-small environmental community that was beginning the difficult work to preserve the natural resources of this unique place.

When she began to write poems a dozen years ago, her love of nature found another expression.  Her poems have been published in The Wisconsin Fellowship of Poets’ calendars; Soundings, an anthology of poetry about Door County; and N.E.W Voices, a literary magazine.  She won first prize in a contest sponsored by WFOP and Captain’s Walk Winery, with Ode to Wine.