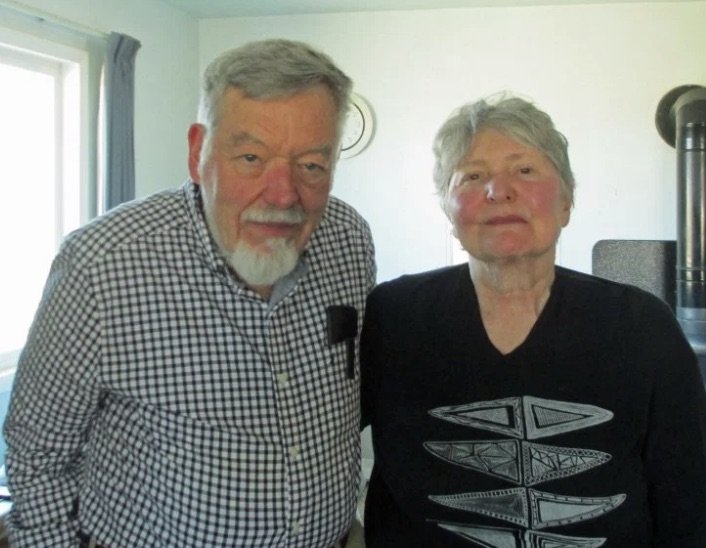 Thomas and Ethel Mortenson Davis will be the featured poets at the Dickinson Poetry Series at the Unitarian Universalist Fellowship in Ephraim on May 8th at 7:00 p.m. The Dickinson series is named after Emily Dickinson, the famous American poet and includes a performance by a “featured” poet(s) and then an open mic where poets from the audience have the opportunity to present one of their poems.

Thomas Davis has had six books published, including two epic poems, The Weirding Storm, Bennison Books, a British publisher, and An American Spirit, Four Windows Press. He has given readings, mostly at colleges and universities in several U.S. states as well as in New Zealand, Canada, and Australia.

He will be primarily presenting sonnets from his novel about the black fisher community that was established on Washington Island before the Civil War. In the Unsettled Homeland of Dreams is being published by All Things That Matter Press and should be released this spring or summer.

Influenced by the imagist poets, Ethel Davis has had five books of poetry published, I Sleep Between the Moons of New Mexico, White Ermine Across Her Shoulders, Here We Breathe In Sky and Out Sky, The Healer, and Under the Tail of the Milky Way Galaxy. She will be reading poems from the body of her published work, including her new book that she just signed a publishing contract for, A Letter on the Horizon’s Poem.

Ethel Davis is also an artist whose pastels have appeared in different Door County galleries.

After the poetry reading the Unitarian Fellowship hosts a refreshment period where the audience and poets can, as Charles Lauter, the emcee of the event, always says, “can discuss the poetry presented while refreshing themselves with food and drink.”