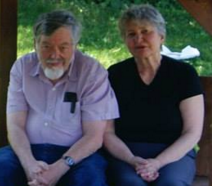 Ethel Mortenson Davis was raised on a dairy farm in Marathon County where she was instilled with a deep sense of the earth and its diverse creatures.  She was inspired by teachers at Wausau High School to write poetry and develop her skill as an artist.  She studied fine art at the University of Wisconsin-Madison.  She has published two books of poetry, I Sleep Between the Moons of New Mexico and White Ermine Upon My Shoulders.  Her poetry has appeared in anthologies, magazines, and small literary journals.  Her pastels have appeared in both galleries and publications.

Her spouse of 48 years, Thomas Davis retired as the Provost of New Mexico University. He also served as the President of two tribal colleges, the Acting President of another one, and the Chief Academic Officer of two other colleges.  His best selling book was Sustaining the Forest, the People, and the Spirit published by State University of New York (SUNY) Press. He has also published two novels, Salt Bear, Inside the Blowholes, and The Alkali Cliffs.  He helped found College of the Menominee Nation and the World Indigenous Nations Higher Education Consortium, among other organizations.

Ethel’s poetry is intensely imagistic while Tom primarily tells stories in his poetry.