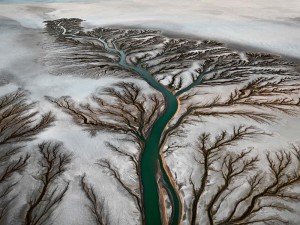 On Tuesday, December 15 at 4:30 pm, Movies That Matter presents a beautiful and environmentally conscious film. Watermark, a feature documentary created by world-renowned artists (filmmakers Jennifer Baichwal and Nick de Pencier and photographer Edward Burtynsky), presents diverse stories from around the globe that examine the relationship between mankind and water.

The filmmakers travel from deserts, to tanneries, to one of the biggest dams in the world to showcase how the liquid shapes people’s lives, as well as how humanity affects this precious resource. Shot in stunning 5K ultra high-definition video and full of soaring aerial perspectives, the film shows water as a terraforming element and the scale of its reach, as well as the magnitude of our need and use. In Watermark, the viewer is immersed in a world defined by a magnificent force of nature that we all too often take for granted – until it’s gone. (2013, 90 minutes)

A Movies That Matter schedule of films for the first six months of 2016 is now available in the lobby.