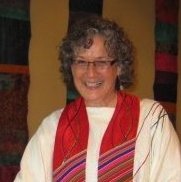 As a retiree, Dottie is spending most of her volunteer hours working for immigrant justice locally at her home in Central Missouri and across the nation—specifically in finding sponsors for asylum seekers as they are released from detention. She is often asked “What can we do? What can we claim as our own role in ending—or at least mitigating—the suffering?” In this message, Dottie will share some of what she has learned about the miasma of fear and confusion that surrounds our immigration system, and will describe the conditions she witnessed inside this nation’s largest children’s detention center in Homestead, FL.

Rev. Dottie Mathews is an ordained Unitarian Universalist minister who served as the Associate Minister of the Fox Valley UU Fellowship in Appleton, WI, before her move into community ministry when she accepted the role of Workplace Chaplain for Goodwill of North Central Wisconsin. There she served the spiritual and emotional needs of the 1500 people who worked for Goodwill across 35 Wisconsin counties.

In 2015, Dottie and her spouse, Rosie Geiser, relocated to Columbia, MO, after they joyfully took on the title of “retiree.” They have been very happily exploring what retirement looks like for them and both are finding many ways to volunteer in mid-Missouri. Dottie & Rosie are active members of the UU Church of Columbia and Dottie has found that working with the interfaith group, Faith Voices, in service of our immigrant friends and neighbors has become a primary focus of her current community ministry.