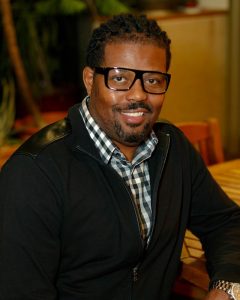 Corey will discuss his experiences as a black policeman in the wake of multiple, highly publicized killings of unarmed African-Americans by police officers. Additionally, Officer Saffold will address the paradox of being a black officer during a time when police are viewed as an enemy and are often not trusted, especially among the African-American community. The shooting and killing of unarmed African-Americans has intensified already strained relations between the community and the police. As such, Officer Saffold will offer his strategy for engaging the community at large around these issues that have also affected him personally. Corey will relay his personal experiences with law enforcement and how these experiences have helped to shape his approach to upholding the law throughout the city.

Officer Corey Saffold is a law enforcement professional in Madison, and is known in the community for his volunteerism and his work with youth of all ages and demographic backgrounds. In addition to his service throughout the city of Madison, Officer Saffold is entrusted by his superiors to do the sensitive work of policing in one of the city’s larger public high schools as a School Liaison Officer.

Register for Event: Sunday Services — The Paradox of Being a Black Police Officer in Today’s Society