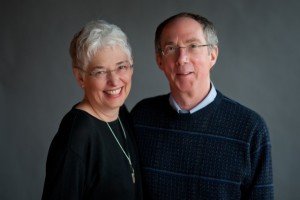 John and Susan McFadden, co-authors of Aging Together: Dementia, Friendship and Flourishing Communities (John Hopkins, 2011) who are known here and abroad for their friendly approach to aging, will speak about  how “senility haunts the landscape of the self-made man” when fear and anxiety about aging arise from conflicting societal demands.

Susan McFadden retired as Professor of Psychology, University of Wisconsin Oshkosh, in 2012.  She continues to work with graduate and undergraduate students conducting research and evaluations for the Fox Valley Memory Project (FVMP).  She is actively involved with the efforts of the FVMP to create a “dementia-friendly community” in the Fox Valley region of Wisconsin.

John McFadden is an ordained minister of the United Church of Christ who served in parish ministry for 34 years.  After retiring as senior minister of First Congregational Church in Appleton, he became the first workplace chaplain for Goodwill Industries of North Central Wisconsin.  He is currently serving as memory care chaplain at Appleton Health Care Center and as a dementia advocate in Wisconsin.