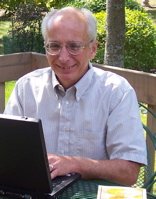 Joseph Priestley is best known for the discovery of oxygen. Much less widely recognized is that he was a dissenting minister in England, an early leader in the Unitarian movement in England and the United States, and an active friend and supporter of the American Revolution. He became acquainted with many of the “founding fathers” including Franklin, Jefferson, Adams, and Washington. Although he spent most of his life in his native England, he emigrated to the United States for the final years of his long life. His inspiring life explored many of the questions that Unitarians continue to discuss today.

Larry Eriksson and his wife, Karen, have been Friends of the UU Fellowship of Door County since 2006. He has been an active participant in the Dickinson Poetry Series at the UUFDC since it began in 2009 and is a member of the Wisconsin Fellowship of Poets. With a Ph.D. in electrical engineering, he spent his professional career in corporate research and management specializing in acoustics, signal processing, and active noise control. He has also had a lifelong interest in philosophy, theology, and history, and is the author of two books on socioeconomic issues: Business Decisions and Broken Strings, Missing Notes.