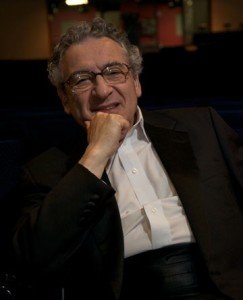 We know Victor Yampolsky as the beloved maestro of the Peninsula Music Festival, entering his 30th season. Little do we know of his unusual journey in life. Born into the atheistic society in Russia and embraced by the Hebrew Immigration Service as a young musician, Victor was invited into the synagogue when he arrived in Boston. These were the beginnings of a journey . . . a journey that continues to evolve. Victor will share some rich anecdotes from his personal and historical story.

Born in the Soviet Union in 1942, Yampolsky emigrated from the Soviet Union to the United States in 1973, where a recommendation from conductor Zubin Mehta led to an audition for Leonard Bernstein, who offered Yampolsky a scholarship at the Berkshire Music Center in Tanglewood, Massachusetts. Two weeks later, Yampolsky accepted a position in the violin section of the Boston Symphony (1973). He currently serves as Carol F. and Arthur L. Rice Jr. University Professor in Music Performance at the Northwestern University Bienen School of Music; Music Director of the Peninsula Music Festival in Door County, Wisconsin; Music Director Emeritus of the Omaha Symphony, as well as the Honorary Director of the Scotia Festival of Music in Halifax, Nova Scotia, Canada.