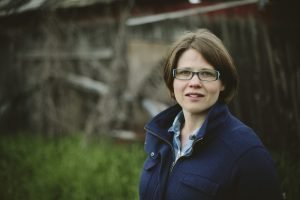 Are anxiety and creativity inextricably bound to one another? Are those of us who tend toward creativity also more likely to tend toward worry? What role does work play in our search for peace and productivity (and what constitutes “work” anyway?). We’ll explore the braided themes of work, creativity, and anxiety—the places they intersect and the places where those intersections can point toward joy.

Singer-songwriter Katie Dahl has performed her original songs everywhere from the dusty cliffs of Mali, to the winding canals of southern France, to the cedar forests of the American northwoods. Though she’s particularly well-respected on her home turf of Door County, Katie tours regularly and has earned accolades nationwide for the depth and power of her alto voice, the literate candor of her songs, and the easy humor of her live performances. In 2019, Katie’s album “Wildwood” spent four consecutive months in the Top 20 of the international folk radio charts. Katie is also a playwright whose musical “Victory Farm” premiered to high acclaim in 2012; she is currently working on two more musicals. Karen Impola of Iowa Public Radio says, “Katie Dahl’s music combines a love for her rural Midwestern roots, a droll wit, and a clear-eyed appraisal of modern life, all served up in a voice as rich as cream.”